Of Interest to the Curious 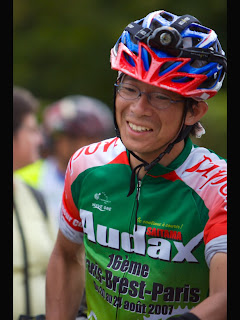 
Paris Brest Paris (PBP) is a randonneuring event. Randonneuring is a form of long distance cycling with events or "brevets" ranging between 200 - 1200 kilometers or about 100 - 750 miles. 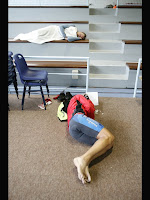 This is an actual butt from the finish line in Paris in August of 2007. Of course in 2011, this could also be me. Actually, I prefer lying on my right side when in the fetal position. Really, just ask my wife!

"Paris-Brest-Paris (PBP) was originally a 1200km bicycle race from Paris to Brest and back to Paris. It is the oldest bicycling event still regularly run. Since 1951 it has not been a race but a challenge ride with upper and lower time limits. There is a 90-hour limit and the clock runs continuously. Many riders sleep as little as possible, sometimes catching a few minutes beside the road before continuing."

So this blog is about my discovering what it means to be a new randonneur and exploring that unfolding journey with you know who. When I first learned of randonneuring just after the 2007 PBP (it is conducted every four years), I immediately knew in my soul that I had to try.

Just so you know, I'm no super-cyclist. Prior to this decision I'd never even ridden a century, let alone the 760 miles that is the equivalent of a 1200k event. But my curiosity got the best of me. "Killed the cat" does come to mind here.

I could try blaming Jan Heine, for he is surely partly responsible. I became obsessed with his grainy black & white photos of the exploits of long distance cyclists of the 30's, 40's and 50's who achieved so much with far less technology. Jan Heine is the editor of Bicycle Quarterly. In the remote chance you haven't heard of Jan or seen his work--like maybe you were stuck in the same time warp as Nero from Star Trek --you really should check him out.

Secretly and truly, the lure of randonneuring and PBP for me has a lot to do with commitment to a challenge and exploring the unknowns that emerge. What I savor is being on the cusp of looking into a new world knowing I'll discover so many new wonders I can't yet imagine (I usually fall in). And a year and a half later I have confirmed what I suspected: the mysteries revealed are worth the effort. Commitment (or falling in) does that.

Here is my favorite commitment quote:

"Until you are committed, there is hesitancy, the chance to draw back, ineffectiveness. It is true: the moment one definitely commits oneself, then Providence moves. All sorts of things begin to happen to help you that would never otherwise have occurred. A whole stream of events issues from that decision, raising in your favor all manner of unforeseen incidents, meetings and material assistance, which you couldn't have dreamt would come your way. I have learned a deep respect for one of Goethe's couplets, which bears repeating: 'Are you in earnest? Seize this very minute. What you can do, or dream you can, begin it. Boldness has genius, power and magic in it.' "- W.H. Murray, Scottish Mountaineer

It's that magic this Curious Randonneur seeks. And in this blog I will try to reveal the magic underneath the commitment, and my curiosity will be my tool.

Posted by CurioRando at 7:18 AM

What the heck is a Randonneur?

In general terms, the French word randonneur is what in English we'd call an ambler or a rambler.

In cycling terms, a randonneur is a long distance cyclist who participates in non-competitive, organized cycling events called brevets. Brevets are typically 200k, 300k, 400k or 600k in length with specified time limits. The grandpapa of all is the Paris Brest Paris event which is 1200k in 90 hours. It is held every four years; next up is this August 21 - 25.

See my first post (May 31, 2009) for more on why I began this blog, and my personal randonneuring objectives.

For More on Paris Brest Paris

How does one say randonneur?

As a French speaker would.

As an English speaker would.

Could YOU be a Randonneur?

Of course you could. A great place to start is the Randonneurs USA website. I remember seeing it for the first time and saying to myself: I've got to give that a try.

Do check out the Yehuda Moon!

If you scroll to the bottom of the posts, you'll find the Yehuda Moon & The Kickstand Cyclery comic. It changes daily, and it's always good for a smile.

Blogs to pique your curiosity